“Am I Irish? Well, with a name like mine I suppose I ought to be. But I’m a true-blue Australian really, for I was born in Australia and so were my parents.” (Journalist Leslie Rees – January 1934. See Note 1)

The five second version
Born in 1907 as Nancy Muriel Smith, she was another member of the great wave of enthusiastic young Australian women who arrived in London between the wars determined to pursue an acting career. She studied at RADA and built a successful career on the West End and in British films in the 1930s. She then returned to supporting roles in film later in life. Her younger sisters Barbara Smith (born 1911) and Lorraine Smith (born 1915) also pursued acting careers in the UK and Australia. Nancy died in England in 1995.

Nancy Muriel Smith had good reason to choose a different name for stage use – not only was the surname “Smith” not all that memorable for an aspiring actor, but she almost certainly wanted to establish credentials of her own. This was particularly so given who her family were. Her father was noted Sydney physician Stewart Arthur Smith (1880-1961), her uncle was Professor of Anatomy and anthropologist Grafton Elliot Smith (1871-1937) while her third uncle, Stephen Henry Smith (1865-1943), was the Director of Education in New South Wales. They were a formidable trio – and regularly attracted public attention as part of their work – Grafton was knighted in 1934, about the time Nancy was making herself known in Britain. Nancy’s mother, Muriel nee Pitt was a wealthy wool broker’s daughter. It was Muriel particularly who was to be the forceful advocate for Nancy’s interest in the stage, and that of her two younger sisters – Barbara and Lorraine.

Born in Sydney on 25 August 1907, Nancy attended Sydney Church of England Girls’ Grammar School from 1921-1925. She may have appeared in some amateur theatre in Sydney, but it seems her eyes were firmly on gaining overseas training and experience – and a trip to Britain and North America with her parents in 1927 probably encouraged her interest in acting. In October 1928 she returned to England with Muriel to study at London’s Royal Academy of Dramatic Arts. Extended study at RADA was unusual for Australians in the midst of the Depression, but the family’s resources made a difference. However, Nancy’s pathway to success on the very competitive London stage was as challenging for her as it was for most young Australians – it took five years of hard work before she gained public recognition in early 1934.

Above: 15 year old Nancy Smith at Sydney Church of England Girls Grammar School in 1922, sitting front row, third from the right. In her final year (1925) Nancy was captain of the “A” Tennis Team and a Probationary Prefect. Photograph from the Doreen Higgins collection, used with kind permission of SCEGGS Darlinghurst.

Nancy’s name first appeared in reviews when Somerset Maugham’s The Breadwinner toured English provinces in mid 1931, under the management of theatre impresario Barry O’Brien. It was not uncommon for young actors to understudy roles in London and then take the lead when the play went on tour. This also appears to have been Nancy’s experience – the play had opened in London in September 1930. She also understudied for Winifred Shotter in Ben Travers‘ farce, Turkey Time at the Aldwych Theatre in 1931. And then, only a few months later, the society pages of Australian newspapers announced Nancy’s engagement to Cyril Kleinwort, one of the sons of English merchant banker Sir Alexander Kleinwort. She had met Kleinwort in 1927, whilst crossing the Atlantic with her parents on their way home to Australia. However, Nancy returned to Australia in February 1932, apparently needing to recover from an unspecified illness, or perhaps to escape the engagement. Either way, the romance seems to have petered out. Kleinwort was not mentioned again.

Above: Nancy in Harrison Owen’s Dr Pygmalion with Margaret Rawlings. The Australasian, 3 Sept 1932, via the National Library of Australia’s Trove.

While at home in 1932, she finally appeared professionally in a leading role on the Australian stage – in The Kingdom of God in Sydney, followed by Dr Pygmalion – where she performed with touring British actress Margaret Rawlings in Melbourne. The reviews were very positive and working with Rawlings invaluable – “spade work for the future” she once described such experiences.

In London again in early 1933, she was cast in her first film – Jack Ahoy with comedian Jack Hulbert, for Gainsborough Pictures. Hulbert approved her casting personally, according to journalist Leslie Rees. The film was popular and she was singled out for praise in her ingénue role as the Admiral’s daughter. It was a great breakthrough. Soon after, she was cast in her first lead in a West End play – Man Proposes. It ran at Wyndham’s Theatre for only two weeks in late 1933, but these successes were enough to ensure she was well and truly established. At last, reviewers were seeing beyond her appearance – her petite size (she was 5 feet or 152 cms tall), her “dimpled cheeks and glossy black hair.” 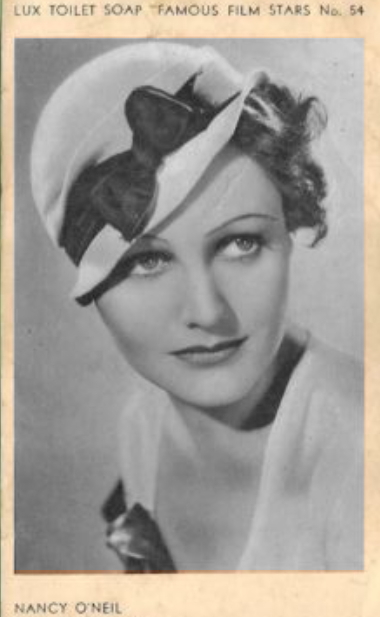 Above: This grainy image shows most of the Smith family together in London’s Hyde Park. Nancy O’Neil, Muriel, Stewart and Lorraine Smith. Lorraine had recently arrived to pursue an acting career, following two films in Australia. (See below) The Daily News (WA) 30 Oct 1935. Via National Library of Australia’s Trove.

Not everything she tried was as successful as Jack Ahoy of course. The Secret of the Loch, also made in 1934, concerned what The Bystander called “the Loch Ness problem.” (The problem being the monster – at that time the subject of some publicity). Even for the time, it must have been seen as a silly film. However, watching some of Nancy’s other films today we can see why she was a popular young star. There was a vibrancy to her performances and she was very much at ease before the camera. And she was versatile enough to appear in light comedy, musicals and thrillers. The musical comedy Brewster’s Millions, made in 1935, where Nancy played the ingénue for Jack Buchanan‘s character, was another success.

Above – Nancy’s voice from the scene shown above. If she ever had vestiges of a colonial accent, her years in England, including two years at RADA, resulted in a voice identical to that of every other young Australian then working in Britain – and indistinguishable from everyone else.

Above: Nancy O’Neil in the thriller Headline (1943). Although she is holding the gun she is about to get shot! Screengrab from copy in the author’s collection.

Nancy made at least 18 films in the 1930s, but for a time, the stage remained her priority. Soon after the success of Jack Ahoy she took the role of Blanche in Vintage Wine at Daly’s Theatre, for most of its May to December 1934 run. She then appeared in Someone at the Door at the Comedy Theatre, another play that enjoyed a long run and good reviews.

In early 1938 Nancy quietly married someone completely unconnected with stage and screen – Dermot Trench, a chartered accountant. The press missed the event, or were not informed. A son was born of the union in 1941 and a daughter in 1944. Nancy continued to appear in supporting roles on the stage again in the 1940s and early 1950s, and occasionally returned to film. For example, she appeared as the Town Clerk’s wife in Charles Crichton‘s highly regarded comedy about eccentric small town English life, The Titfield Thunderbolt, made in 1953.

Nancy died in London aged 88, on 5 March 1995. Denis Gifford’s 1995 obituary for Nancy in The Observer describes her British films as “cheap and cheerful,” and these may indeed be her surviving legacy, as they were for other Australians of the era – Lucille Lisle and Judy Kelly. 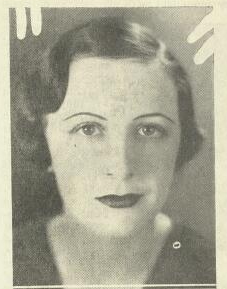 Lorraine Smith appeared on stage in Australia and in two local films – Harry Southwell’s When the Kelly’s Rode (1934) and Ken Hall’s Strike Me Lucky (1934). And a year later, as Lorraine Grey, she appeared in just one British film, Sexton Blake and the Mademoiselle (1935). Publicity of the time suggested a much more fulsome career, but following this she apparently gave up acting. (The IMDB currently confuses Lorraine Smith’s career with several others).

Like Nancy, Barbara Smith also attended RADA, and appeared on repertory company tours in England. She found a career on radio and the stage in Australia and was active performing in Australia to the mid 1960s. This writer is unable to verify the claim she appeared in British films. She married Australian actor Lloyd Lamble in 1945, but the couple divorced soon after.

Note 1
West Australian novelist and journalist Leslie Rees enthusiastically documented the successes of Australian actresses in London in the 1930s, where he also reviewed drama for “The Era”. See also his article “Antipo-deities: How Australian Girls have captured British Stage and Screen” in “The Era”, April 4, 1934.

Note 2
US actor Nance O’Neil (1874 – 1965) apparently pronounced her first name as “Nancy,” hence there has sometimes been confusion between the two women.