Patti Morgan on the cover of Sydney’s Sunday Sun, 19 May, 1946. She was almost 18, and the world was at her feet. Via the National Library of Australia’s Trove. Photographer unknown.

Patricia Joan Morgan
She was born in Sydney, New South Wales, Australia, on 7 September 1928.  A singer, dancer and model in Australia from 1944-47, she then moved to the UK where she made a few films. She also continued her highly successful modelling career and appeared on British TV’s “Dancing Club” with her first husband Victor Sylvester Jnr. She lived in Lebanon from 1958-80 while married to Dany Chamoun. She died in London, England, on 2 February 2001.

Patti Morgan was born Patricia Joan Morgan in Sydney in 1928. Her mother was Irene, her father James was a company manager, and the family lived in the comfortable eastern suburb of Vaucluse, Sydney. Their old home has long since been demolished but looking around the suburb today one can still imagine what a sunny life was had by Patti and her younger brother Jim, at 99 Kings Rd, even in the dark days of the early 1940s. Patti attended Sydney Church of England Girls Grammar School, a private girls school that still operates in inner Sydney today.

Throughout her life, Patti’s modelling and acting was well documented by an enthusiastic Australian press. Patti’s appearance – she was 172 centimetres or 5′ 8″ tall, blonde and trim, epitomized the stereotypical sporty outdoors Australian girl. In the end Patti did relatively little acting, although she did become a well known model and TV hostess in England.

Below: A very young Patti Morgan, from the Daily Telegraph, 4 May 1944. Via National Library of Australia’s Trove

She first popped up in publicity in 1944, when she was 16. She was a young singer and dancer with ability and some connections, and she gained a small role in a Red Cross show for US Forces in Australia, singing and taking on the role of cartoon character “Windy City Kitty”. (Kitty was a similar character to Norman Pett‘s “Jane” who appeared in the London Daily Mirror during WWII). Despite the publicity, she did not particularly resemble Jack Crowe‘s character, drawn for Yank Down Under magazine, nor the many Kittys who were usually drawn  on the noses of USAAF aircraft. Never the less, appearing to enthusiastic service audiences was a great opportunity for a patriotic young woman who had her heart set on a career as a performer, and she seems to have reveled in it.

In May 1945 she entered the Miss Australia contest with the support of the New South Wales Police Boys Clubs. The preliminaries for the contest dragged on for months and in the end she didn’t win, but it didn’t matter – the fund raising events, parades and modelling assignments put Patti firmly in the public eye. Patti’s appearances as a “pin-up” photo model also dates from this time. She gained such popularity that one RAF Lancaster squadron allegedly wrote to her asking her “permission” to paint her image on one of their aircraft. Writer Madeleine Hamilton’s survey of Australian women who became pin-ups at this time includes Australasian Post’s account and Patti’s response. The Australian War Memorial also holds the accompanying photo. 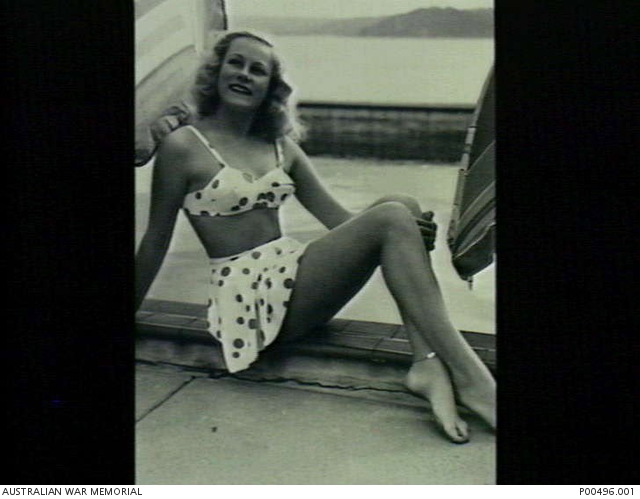 Above left: Patti Morgan (Undated but probably 1945-46) from the Australian War Memorial collection. The record accompanying states Patti’s portrait was painted on one of the Lancaster bombers of 50 Squadron RAAF. (But 50 squadron was a RAF squadron)
Above right: Patti with Sub Lieutenant Geoffrey Ross Downer of HMS Venerable, shortly after their engagement was announced in April 1946. She broke off the engagement in October 1947. The Sunday Telegraph, April 1946, Via National Library of Australia’s Trove.

In April 1946 her engagement to a Royal Navy officer from the British Pacific Fleet (then based in Sydney) was announced. She continued modelling and took up acting classes. In October, newspapers picked up the story that she had been offered a 7 year contract with the Rank film organisation. It was wrong, of course. Rank had offered her an audition if she made her way to London. Somehow, Australians and their journalists remained convinced a film contract could be offered to an untested but beautiful antipodean. Very similar accounts of Mary Maguire and Jocelyn Howarth being offered overseas film work had appeared ten years before. 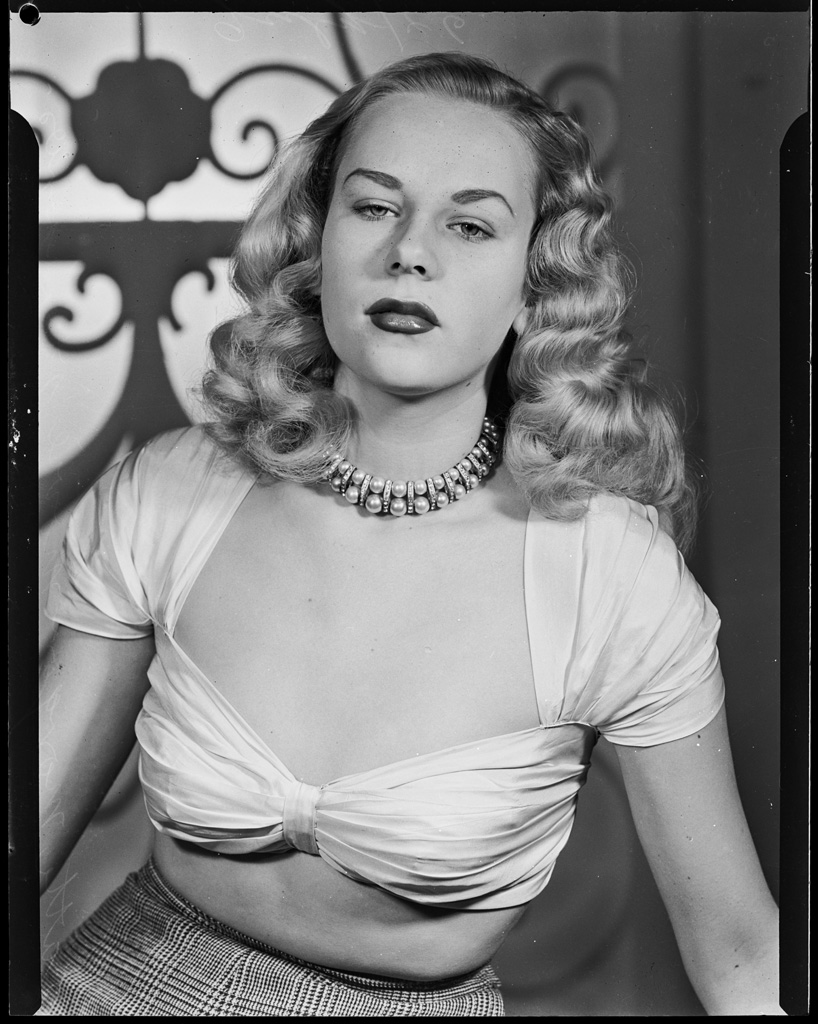 Patti in July 1946, photographed by Norm Herfort. Source Mitchell Library, State Library of New South Wales and Courtesy ACP Magazines Ltd. This is part of a large folio of photos of Patti. (Note that some of the library’s collection are still in copyright)

In mid March 1947, Patti and her mother headed off for England aboard the MV Selandia. The (Sydney) Daily Telegraph reported that she took a wardrobe that “included 20 evening gowns, 35 dresses, 15 suits, three dozen pairs of shoes, and a dozen hats.” On arrival in London she may have been tested by Rank, but within a few weeks she announced that she had a contract with Premier Productions, a new company under the leadership of Maurice Ostrer. Ostrer had left a successful career at Gainsborough films after a serious disagreement with J Arthur Rank, regarding the artificial and “lurid tone” of films he believed the public liked. Rank did not approve.

Patti had good reason to be confident about her first film, Idol of Paris. Apart from Ostrer’s involvement, the director was Leslie Arliss who had directed The Wicked Lady and the cast included well known actors Michael Rennie, Margaretta Scott and Miles Malleson. Unfortunately, the completed film, meant to be in the “Gainsborough style,” was a complete critical and popular disaster. The film is impossible to find today, but we know that on release the reviews were universally negative and the box office did not ignite. C. A. Lejeune, the London Observer’s film reviewer, even felt it could be the worst film of 1948, were it not for the fact it made him laugh and laugh it was so silly. “Such stupendous imbecility in a film… (with) such excruciating dialogue, demands a sort of recognition…” he wrote in his 7 March review. Variety’s review dismissed the script as “ill-written and corny” and the film not worthy of export to the US. The film stalled the careers of a number of young actors, including Beryl Baxter and Patti, while it ended Maurice Ostrer’s efforts at independent film production altogether.

Left: Beryl Baxter, Director Leslie Arliss and Patti on the set of “Idol of Paris.” From Pix Magazine, 4 October, 1947. Via National Library of Australia’s Trove
Right: Patti in a random English publicity shot in 1947 when she was under contract to Premier Productions. Author’s Collection. Patti was able to develop a profile through work as a model however, and a new opportunity also beckoned in Britain’s fledgling TV industry. In 1949 she met and married Victor Silvester (Junior) and at the same time, joined Victor Silvester (Senior)‘s very popular television show Dancing Club, as the regular hostess. 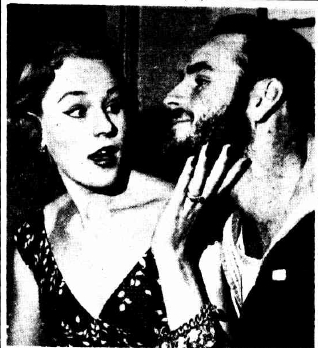 Left: Victor Silvester Junior with Patti. The Melbourne Herald, July 29, 1949. Via the National Library of Australia’s Trove
Middle: Patti on her wedding day – in a dress made by mother Irene. The Northern Whig and Belfast Post, July 29, 1949 via British Library Newspaper Archive Project.
Right: Patti met younger brother Jim again, when HMAS Sydney visited Britain for the Coronation. Here she stokes Jim’s naval beard. The Argus, May 15, 1953. Via the National Library of Australia’s Trove

Although Patti did not find more than a few roles as an extra in British films and the odd role on stage in a production for charity, she was very active throughout the fifties as a mannequin for designers like Norman Hartnell and with her television work. British Pathe newsreels regularly featured Patti, now one of the UK’s leading models, the following being some examples:

Above: D.C.Thomson & Co’s Bunty magazine, a girls’ comic book, sometimes featured a character modelled on Patti Morgan. This example is dated 1979, and testimony to Patti’s high public profile. The magazine ceased publication in 2001, but copyright is still held by the company. Author’s collection.

In 1957 Patti finally did take a leading role in a film. Booby Trap was a rather silly suspense/crime film that at 70 minutes in length was almost certainly intended as a cinema program filler – a second feature. Here Patti finally did demonstrate her ability as an actress – and she performs well given the limitations of the role as Jackie. Even after ten years in the UK, her voice sometimes still sounds as though it’s straight from Sydney, as in this example.

Patti Morgan as Jackie and Harry Fowler as Sammy in “Booby Trap” (1957). Renown Pictures re-released this film in 2015. Author’s collection.

Patti’s marriage to Victor Silvester ended soon after she made this film. In January 1958 she married Dany Chamoun, the second son of former Lebanese President Camille Chamoun. Thereafter she spent much of her time in Beirut. Her 2001 obituary in the London Daily Telegraph, apparently written by someone who knew her well, states that she set up her own modelling agency and television production company in Beirut. She wrote several accounts for the Australian press describing the difficult life she coped with in war-torn Beirut. But her businesses and her marriage did not survive Lebanon’s catastrophic civil war – that raged from 1975 to 1990.  She moved back to London in about 1980. Dany Chamoun and his second wife were murdered in 1990.

Patti made several return visits to Australia – briefly in 1962 and for a longer visit in 1972. On the latter occasion, The Sydney Morning Herald claimed “the goddess has returned,”  and indeed she was welcomed by many old friends, spending her month in Sydney near the beach at Bondi, where she had spent so much time in the 1940s.

Patti died in London in 2001, aged only 72. Almost every account of Patti records her good humour, confident sense of self and her resilience. Her obituary also states that she struggled with diabetes in later life.

Patti’s daughter Tracy Dany Chamoun was born in 1960 and closely resembles her Australian-born mother in appearance. Fluent in Arabic, French and English, she has been a key voice advocating for liberal democracy and political reform in Lebanon. She served as Lebanon’s ambassador to Jordan until resigning in August 2020, following the explosion of stockpiled ammonium nitrate, stored at the Port of Beirut.

Above: Patti Morgan with daughter Tracy Chamoun, in about 1975. The Australian Women’s Weekly, 7 April, 1976, P8. Via the National Library of Australia’s Trove.

The IMDB incorrectly credits Patti with roles in several films made in Hollywood in 1947-8. However, this is a different person. The US Patti Morgan who signed with the Hal Roach studio in April 1946 was a US-born actress, and a brunette.