Maie Saqui as she appeared at the height of her fame on the London stage as a “Gaiety Girl,” c 1900. Postcard in the Author’s collection.

Born May Vivian Saqui, Fitzroy, Victoria, Australia, 19 December 1879,
Died, London, England, UK, 28 March 1907. Joined the cast of the visiting London Gaiety Company in Melbourne in 1892, after this appearing in other stage plays. Departed for London in 1897. She found work with George Edwardes at the Gaiety Theatre and was joined a year later by her sisters Gladys and Hazel, who also performed in London.

May Vivian Saqui was born in Fitzroy, Melbourne Australia on December 19, 1879. For a short period of time she was one of London’s celebrated “Gaiety Girls”, performing in musical comedy at George Edwardes Gaiety Theatre. Her father John Isaac Saqui (also known as John I or Jack) was a bookmaker and property speculator, later to try his hand at cigar manufacturing. Her mother Esther nee Barnett (or Stella) was the daughter of the owner of a large central Melbourne grocery store. She and John I married in 1877. At the time of May’s birth, the family home was listed as living on the corner of Nicholson and Moor Streets, Fitzroy. Five years later, they lived next door. The two fine “boom era” buildings still stand, and today they speak of the opulence and confidence of the young colony. The family were wealthy enough to be advertising for servants at the time of May’s birth.

Above – the stereotypical Edwardes chorus girl from the play “A Gaiety Girl.” Public domain image by Dudley Hardy, Paris, 1896 via Wikipedia Commons.

The very grand building at left, now No 122 Nicholson street, was built in 1862 by architect John Denny. The white building next door is “Heatherleigh”, a more traditional terrace. The Sands and McDougall directories reveal that in 1880 the Saqui family lived at 122, while by 1885 they lived at No 120. These constant moves probably reflect John I’s activities as a property speculator. Photo- Author’s Collection.

May’s English-born grandfather, Abraham (Austin) Saqui (1834-1889) had arrived with some of the extended family in the colony of Victoria in the mid 1850s – like so many, they were attracted by the fabulous stories of easy fortunes to be made on the goldfields. A talented musician, Austin departed for Beechworth, in the centre of the Ovens Valley goldfields almost immediately. In time, he became a Melbourne hotelier, a “flamboyant bookmaker” and dabbled in owning horses. Austin’s great breakthrough came in 1869, when his horse “Warrior” won the Melbourne Cup, at odds of 20-1, winning him almost £20,000 – a fortune at the time.

John I Saqui (1855-1916) thus followed his father’s footsteps as a bookmaker, and after May’s birth, fathered several more children – Barnett “Baron” Napoleon (1881-1967), Gladys Mignonett (1884-c1919) and Hazel Eileen (1887-1975). Another daughter, Phyllis, died in infancy. By the time Hazel was born at Zabulon Terrace in Drummond Street in 1887, John I was describing himself as a cigar-maker, although he was also still a bookmaker and the constant move of addresses also suggests he was still speculating on properties.

The spectaular Zabulon Terrace in Drummond Street, Carlton where the Saquis lived when Hazel was born in 1887. The family lived at No 22, the unaltered building on the left. But by 1890, they lived over the road at an almost identical terrace at No 27. Author’s Collection.

From the late 1880s, May and sister Gladys appeared in concerts under the tutelage of a relative, well known Melbourne dance teacher Miss Julia Green. May earned a name for herself as a talented dancer before she was ten – even in 1888, Melbourne Punch noted “this little lady really deserved the encore she received” with her performance in Dance Du Nuit. The family valued music and dance, and May was also to become a talented violinist. By May 1892, at the age of only 13, she had apparently done with school and moved onstage for good, joining the cast of the Australia tour of the London Gaiety Company, in Faust up to Date, (choosing to spell her name “Maie” from this time on). This brought her into the company of numerous talented English performers – Maud Hobson and Grace Wixon amongst others. From 1893 she appeared in pantomimes including Little Red Riding Hood, Cinderella and then Djin-Djin. Perhaps the highlight was performing  in the first Melbourne run of Trilby in 1896, a play based on a new novel by George du Maurier. May’s high-kicking dance in Act 2 was particularly memorable. The anti-Semitic theme of the play (the evil manipulator of the heroine is Svengali, a archetypical Jewish villain of the Fagin, Oliver Twist type) was apparently something May could live with or was used to. 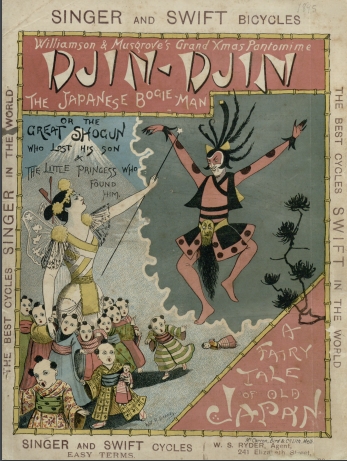 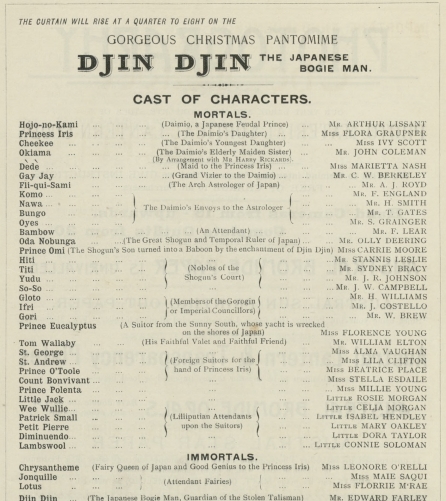 The pantomime Djin-Djin, The Japanese Bogie Man, A Fairy Tale from Old Japan, opened in Melbourne on December 26, 1895. These screen grabs are from the full program held by the State Library of Victoria – which can be viewed online. Maie Saqui is listed in the program, together with numerous other well known actors of the time, including Carrie Moore. Written by Bert Royle and J.C.Williamson, with music by Leon Caron and with strong Australian themes, the show was hugely popular and according to Ian Dicker, the audience refused to leave on the final night of the Melbourne season. Via the State Library of Victoria.

Unfortunately, at the same time her career was taking off, Australia and particularly the otherwise booming city of Melbourne had slumped into a severe depression. A number of Australian banks closed between 1890 and 1893, numerous businesses shut down and scores of land speculators were ruined. Unemployment surged while the only public works to continue was the building of Melbourne’s much needed sewerage system. It has been suggested that John I Saqui lost all his money at this time, and indeed, given his business interests, it would have been unusual if he did not take a hit of some sort. But there was another even more serious reason why his business closed.

Some time in 1890, John I was assaulted as he arrived home to Drummond Street. (The illustration at right is from the “Truth” newspaper account some thirty years later) He was found unconscious at his front door – he had been struck on the head. It was thought this was part of an organised campaign to rob wealthy bookmakers. Although he recovered and returned to work, his mental health failed over the next six years. In August 1896 Stella took the heart-wrenching decision to have John I admitted to the Yarra Bend Asylum. He had become seriously delusional. Stella blamed his state on the old injury to his head, and a note from a doctor she consulted (still in the asylum records) seems to concur. We can imagine the anguish the tight-knit family must have felt and one wonders just how bad John had become before Stella was forced to have him hospitalised.

In May 1897, at the end of the run of Trilby, it was announced that Maie was heading to England. She travelled as a “23 year old” on the RMS Orizba.  By giving that age, there were fewer questions to answer than if acknowledging she had yet to turn 18. Good fortune and good connections were with her. Within weeks of her arrival in London she was performing, and soon had a contract with George Edwardes of the Gaiety Theatre. It was claimed Grace Wixon helped mentor her. In July 1898 Stella and her three other children set sail for England on the RMS Ormuz, while John I’s mother Julia took up residence for a time at 27 Drummond Street. (This also suggests the family had weathered the 1890s crash.)

Left: “The Messenger Boy” cast, half way through its 1900 run, from “The Standard,” June 14, 1900. Via Newspapers.com.
Right: Maie – about the time she arrived in London and began work for Edwardes. From “The Black & White Illustrated Budget”,1899.Via the Internet Archive.

She proved to be spectacularly successful in Edwardes’ musicals. She notably performed in The Geisha (1897), The Messenger Boy (1900) with Maud Hobson, The Toreador (1901) and Gilbert and Sullivan’s Trial by Jury (1902). Melbourne newspapers enthusiastically reported on her London performances, she was after all, a local girl. For example, on October 13 1899, “Table Talk” reported that “Miss Saqui’s… dainty dancing so delighted the patrons of ‘A Gaiety Girl’ at the Gaiety Theatre…  Some two years ago… she submitted her credentials to that excellent judge, Mr. George Edwardes, who being more than satisfied with them, secured her services for three years, and she at once stepped, or bounded, into public favour….”

Both Maie’s sisters Gladys and Hazel performed on stage for Edwardes, appearing in musicals at the Gaiety between 1902 and 1910. Gladys in particular gained publicity, partly because she was thought to closely resemble Maie.

In 1904 Maie married Arthur Hope Travers, a Captain in the Grenadier Guards who had seen service in the Boer War. She chose to retire from the stage. A daughter was born of the union in 1905. Sadly Maie’s health began to fade soon after. She was reported to be very ill in early 1907, and she died of cancer in March 1907, aged only 27. Travers eventually remarried and served with distinction again in the First World War. Maie’s English stage career had lasted just six years. Gladys too, had a short career on stage – less than ten years.

Maie’s only child, Inez Hope Travers (later Pringle) lived a long life and was acknowledged in 1982 with the Venerable Order of the Hospital of St. John of Jerusalem, and then an MBE in 1986, for services to ex-servicemen in Dublin. It is safe to assume Maie would have been very proud.

When their mother Stella died in England in 1946, she left an estate of £9345 to her surviving daughter, Hazel. Hazel had married British actor Nelson Keys in 1908, after her own brief experience on stage. Hazel and Nelson raised a family of five boys, most of whom entered the British film industry with great success. Hazel died in 1975.

John I Saqui died in the Yarra Bend Asylum in October 1916. He had been there for twenty years.

To John Shrimski, a second cousin of Maie Saqui, for his assistance and encouragement.

National Library of Australia- Trove
In addition to the newspapers hotlinked in the text, the following may be of interest:

3 thoughts on “The strange story of Maie Saqui”