Above: Enlargement of a group photo of Pollard’s Lilliputian Opera Company in Manila, 1903. Willie Thomas is at right. Also shown – from left Teddie McNamara, Oscar Heintz, Fred Bindlass. Willie was the only one of these boys not to move to the US. Photo courtesy Australian Performing Arts Collection, Arts Centre Melbourne.

On leaving the company, Willie became a butcher in Sunshine, Melbourne, and later in Western Australia.

“Willie” Thomas was a child performer in Pollard’s Lilliputian Opera Company, as it toured cities in South East Asia and North America, several times, between 1901 and 1907. He is shown below with his older sister Emma Thomas, while the company was in Vancouver. 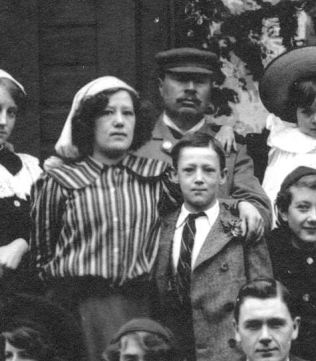 Willie was perhaps 14 and Emma 17 when this photo was taken c1902-4. Behind him in the peaked cap is Charles Pollard, company manager. The full photo of the Pollard Company is on the Vancouver As It Was website. Used with their permission.

William Thomas was born in Collingwood in January 1889 to Ironmonger William Albert Thomas and his wife Emma, nee Stone. There were four older children – two brothers and two sisters in the family. Two other sisters died in infancy.

Much of the history of Pollard’s Lilliputian Opera Company is lost to us today and confusingly, there was more than one troupe of performers using this or a similar name in the early twentieth century.  Managed by Charles Pollard and his sister Nellie Chester, we know that they ran several extended and highly acclaimed tours to the Philippines, Japan, China and North America between 1901 and 1909 – each lasting a year or more, punctuated by a short break of a few months at home in Melbourne. This troupe is also of interest historically, because so many of its performers were from working-class inner Melbourne. And a number of its performers also went on to stay on in the US and work in Hollywood – including Alf Goulding, Harry Fraser or “Snub Pollard“, Daphne Pollard, Teddy McNamara, Fred Pollard (Fred Bindlass) and Jack Pollard (John Cherry). And the talented Willie Thomas from Collingwood worked amongst them on the three performance trips – September 1901-October 1902, January 1903-April 1904, and July 1904- February 1907. 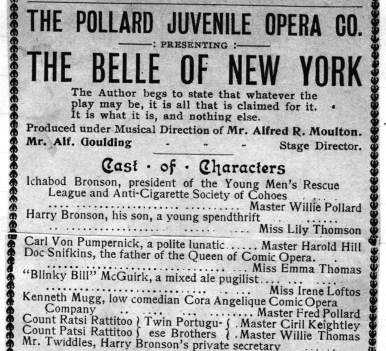 Above: Part of the program for Pollard’s performing at the Tivoli Opera House, San Francisco on November 16, 1901. Both Willie (12) and Emma (16) have leading roles in The Belle of New York. Author’s Collection.

Historian Gillian Arrighi points out that several Australian companies employed child actors for prolonged offshore tours at this time. This practice enabled the producers to avoid contravening child labour and education laws in newly federated Australia. And apparently it was lucrative – for families and the organisers. Child performers made pocket-money selling postcards of themselves, while parents back in Australia were paid sometimes in advance or via a trust fund.

Pollard’s Lilliputian Opera Company in costume, taken in the US about 1905. It appears to show Willie Thomas, second from right at the front, next to Daphne Pollard. The two little boys fourth and fifth from the left in the front row are Freddie and Johnnie Heintz. In the  postwar world Johnnie became a pastry cook in Adelaide. Freddie tried his luck acting again in the US. Copy of postcard courtesy Robert Maynard

The Thomas’ names are also found amongst other Pollard performers on the shipping manifests of the time. More interesting are the accounts that appeared in US and Australian papers as they travelled, that documented some of their experiences. By 1905, Willie was amongst the Company’s leading performers. 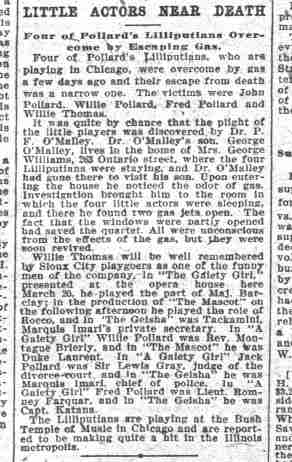 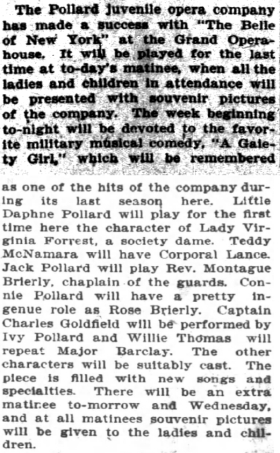 Left: On his first tour of North America, Willie Thomas and three other performers had a near miss with a gas leak, according to The Sioux City Journal (Utah), May 28 1902. Via Newspapers.com .Right: A second tour, another performance. The San Francisco Chronicle, September 6, 1903, announces a new Pollard season and some of the stars – including Willie. Both these articles confirm the constant rotation of shows while on tour. Via Newspapers.com

Robert Maynard still holds the postcards, makeup box and other ephemera that belonged to his grandfather. There are also over 50 postcards that Willie collected including several from Shanghai, Japan, Suva, Canada and the United States. These are unmarked, so he apparently never posted them home, rather – keeping them as mementos of his travels. The remains of his makeup box includes fake moustaches and numerous sticks of grease paint.

Willie and Emma’s final North American tour with Pollard’s seems to have ended in early 1907, when he was 17 and she was 21 – both now too old to convincingly be presented as child actors. (Emma appears to have travelled as a non performing adult on this tour). Perhaps also, this marathon Pollard tour of 1905-1907 convinced Willie that performing on stage was not what he wanted to do. 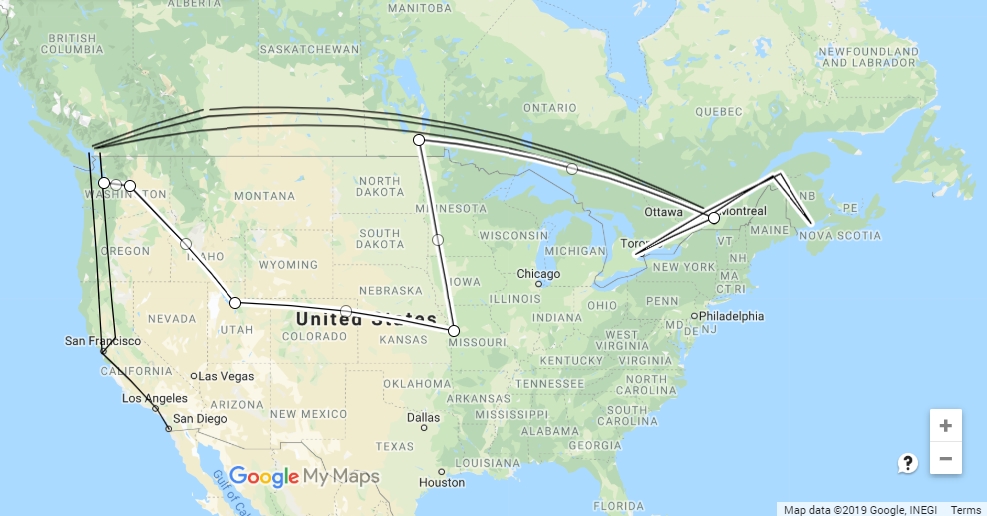 Above: Willie Thomas’ makeup box. Map – The Pollard Company’s “Grand Tour” of North America (March 1905- Jan 1907) avoided much time in the eastern USA, where child labour law made performances impossible. The troupe was in Sacramento during the April 1906 San Francisco earthquake. The map is based on Midas Martyn‘s diary. Thanks to Catherine Crocker for sharing this information. Courtesy Google Maps. Click to go to the google map – the author’s attempt to illustrate this extraordinary tour.

This writer has commented elsewhere of the controversy accompanying Pollard’s travels to the Far East and North America.  The New York Society for the Prevention of Cruelty to Children, or the “Gerry Society” kept Pollard’s away from the east coast of the US. The society’s opposition to children performing on stage was well-known. The Chicago Tribune of 19 May 1902 touched on this issue in a long article about the company during their only visit to that city; “Although the idea of keeping children on the stage is repugnant to Americans, and although it is forbidden by law in some states, the Pollards claim that their children… suffer no evil effects from the experience.”

Whatever other reasons he had for leaving the stage, a few years on and now calling himself “William,” he had became a butcher. He was also a competent Australian Rules Football player, playing for teams in Boulder Western Australia (where he spent a few years between 1910 and 1913) and Sunshine, Victoria. 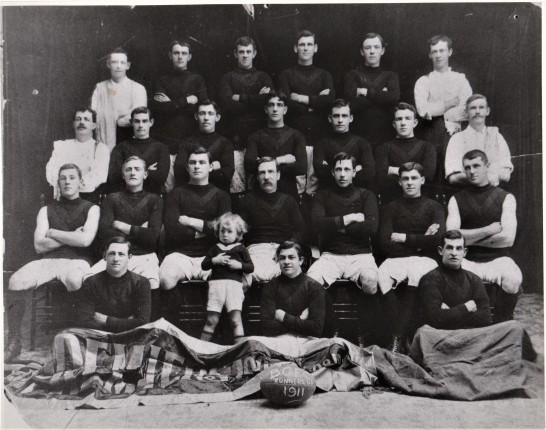 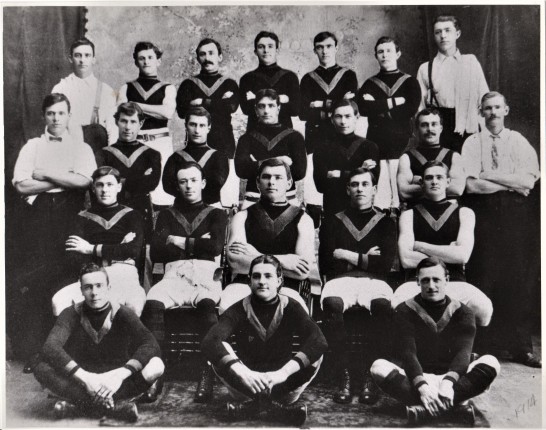 Following the outbreak of war and during the surge of enlistments following the Gallipoli landings, William and his two older brothers Albert and Jack (John) joined the Australian Imperial Forces. With other soldiers of the 3rd Division AIF, they sailed on the Medic, arriving at England in July 1916. William went on to serve in France with the 29th and 30th Batteries, 8th Field Artillery Brigade. In the photo enlargement below, William is seated on the left, Albert is on the right – unusually the two brothers served together. In February-March 1918 William’s military record shows he was granted leave in England. There he saw Albert De Courville‘s latest review, Box o’ Tricks, at the London Hippodrome, featuring a very old friend, Daphne Pollard in the line-up, whom he met after the show. The conversation must have been a joyful one about show-biz;  it defies belief that William, having been under fire and in action for the last 14 months, would wish to talk about the appalling reality of trench warfare. 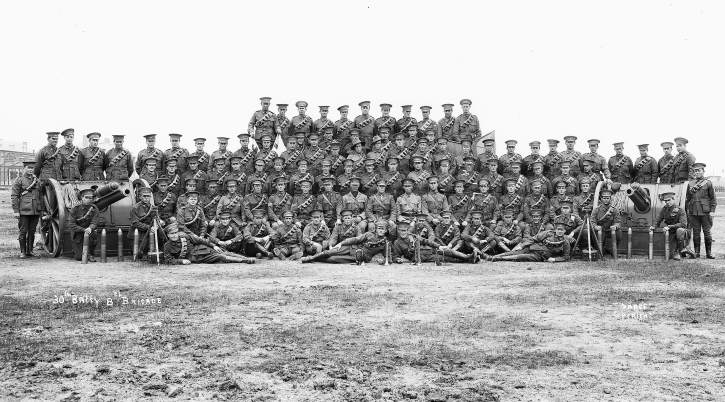 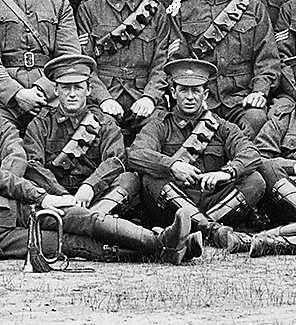 Above: William and Albert (enlargement)  in France c1918. Photos courtesy of Robert Maynard

Miraculously, all three Thomas brothers survived the war and returned to Australia in 1919. In the early 1920s William set up a butcher’s shop in Sunshine, a western suburb of Melbourne, in partnership with brother Albert. In 1924 he married Lizzie O’Brien and brought up a large family, at first in the house next to the shop, and later in nearby Adelaide Street. Lizzie, the “life of the party” and a favourite with all the children in the family, called him “Butcher.” Like many returned soldiers, William liked a drink, and earned a reputation for regularly being thrown out of the Sunshine pub. One can’t help wondering if the Sunshine pub became the place he liked to practise the keen sense of humour he had developed on stage with Pollard’s, years before. 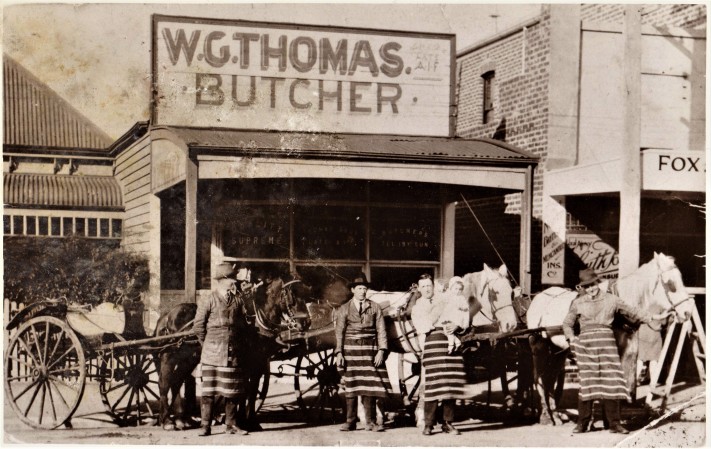 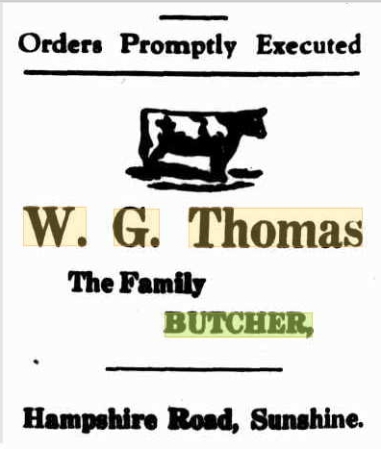 William Thomas’s Butcher shop, on Hampshire Rd, Sunshine. William Thomas is proudly holding his daughter Emma, with brother Albert (second from left) and nephew William (at right) and another butcher. Before widespread refrigeration, the horse and gig was a quick and convenient way to sell and deliver meat. Photo Courtesy Robert Maynard.
Advert at right from the Sunshine Advocate, 9 June 1928, Via the National Library of Australia’s Trove.

Unfortunately, the Depression hit William’s family hard. Such businesses were used to extending credit but also dependent on a regular cash flow. A kind man (in 1924 he had paid for his nephew to travel to a scout jamboree in England) William’s generosity eventually got the better of his business in the hard times of the 1930s, and it closed down.

By 1941, the family had relocated to Boulder, Western Australia, where William, determined to make a fresh start, became a butcher again. He died there, aged 80, in 1969. Sister Emma had died in Sunshine in 1963.

A few years after Willie Thomas’ final tour, the era of the travelling troupes of Australian children came to an end. In 1909, another Pollard family member, Arthur Hayden Pollard, who had been on some of the North American trips, raised a mostly new troupe to perform in South East Asia and India. It was a disaster and amid the claims of impropriety, cruelty and underpayment, the troupe broke up in February 1910, with the children forced to find local support to make their own way home. New Federal legislation in 1910 banned Australian children travelling overseas to perform.

William kept his Pollard’s make-up box all his life, which says something about how fondly he viewed this exciting stage of his childhood. If he regretted his seven years of travel and performing, and then leaving the stage behind forever, he never said. 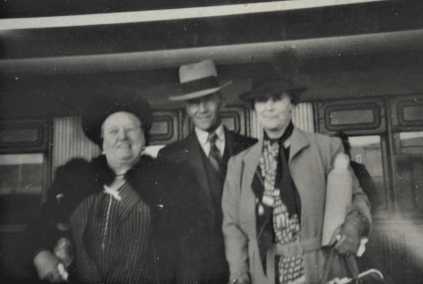 Above: Emma Thomas (left) in the 1950s, welcoming Mr and Mrs Pettit on a visit to Melbourne. The Pettits employed William as a butcher in Western Australia by this time. The days of Pollards Lilliputians were far behind. Photo courtesy Robert Maynard.

Emma and Willie travelled with the following Pollard Lilliputian Opera Company tours of South East Asia and North America under the leadership of Charles Pollard and Nellie Chester:

3. Departing on a Queensland tour July – Sept 1904, then to “the far east” late September 1904, then SS Empress of India arriving Vancouver BC, March 1 1905.
Apparently returning home on the SS Moana in February 1907, an extraordinary tour of 32 months.

Another Pollards trip departed sometime in June 1907, arriving in the US on the SS Hong Kong Maru from Yokohama, Japan on Mar 3, 1908. They arrived home in Australia on RMS Makura on April 17, 1909. Emma and Willie were not on this final trip or its disastrous follow-up to India organised and led by Arthur Haydon Pollard.

To Robert Maynard, William Thomas’ grandson, for so generously sharing his family history – much more than I could fit in this article.