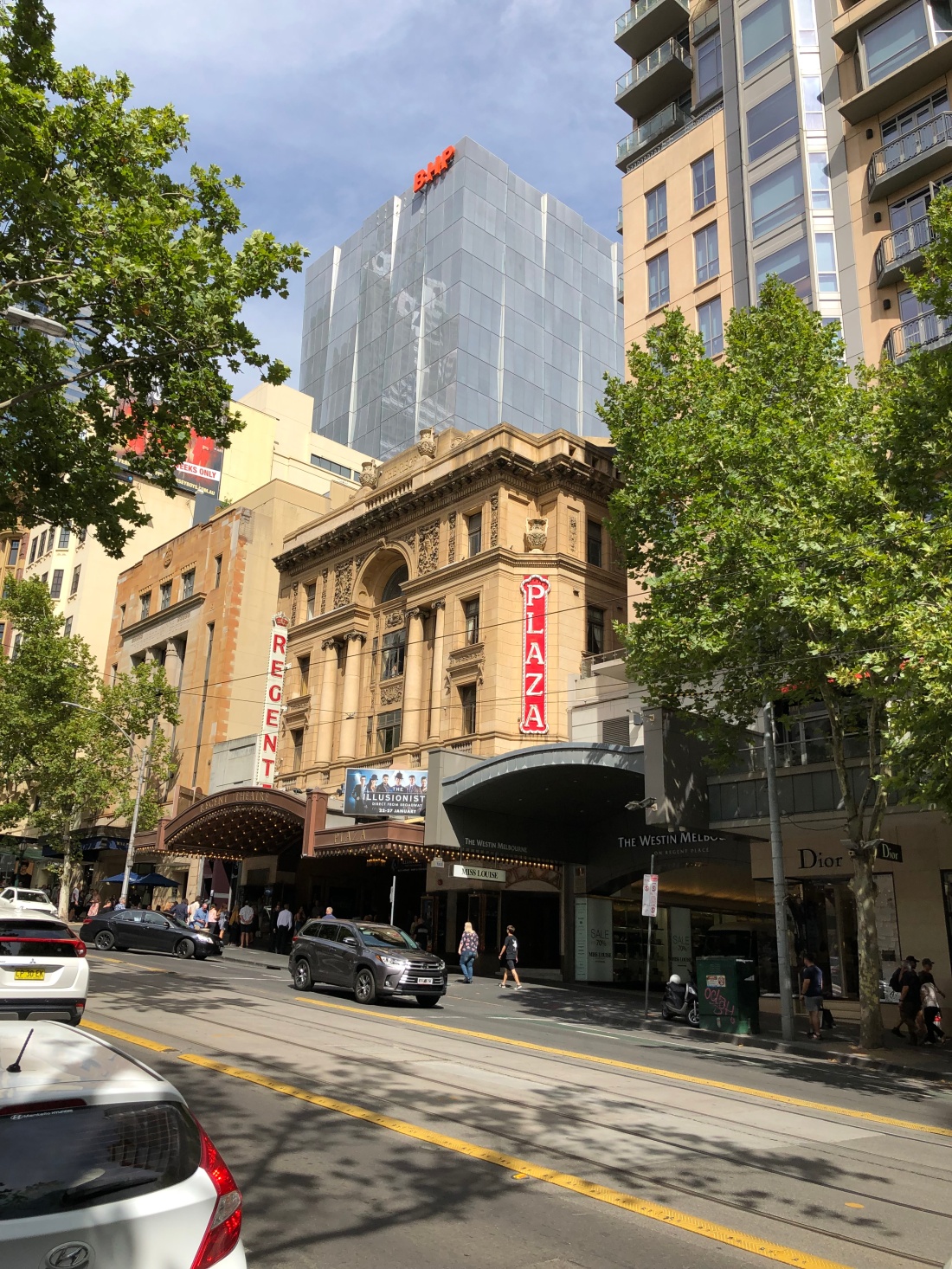 Melbourne’s Regent Theatre near the corner of Collins and Swanston Streets. Rebuilt in 1945-7 under the supervision of architects Gordon Murphy and Reg Appleford. Photo author’s collection.

Of my grandfather’s architectural legacy I have almost no evidence at all. Melbourne cinema architect Gordon Murphy (1889 – 1967) was a reserved and inward looking man, who died when I was just ten years old. Unlike my mother and father, who were also architects, Gordon never spoke of his work, at least in my hearing. The surviving evidence of a lifetime designing cinemas is – a silver-plated platter (a gift of Hoyt’s theatre chain after the restoration of Melbourne’s Regent Theatre in 1945-7) and two rolls of un-used theatre tickets, of dubious provenance. Of his cinema plans and specifications it appears at least some have survived in the Public Records Office of Victoria. 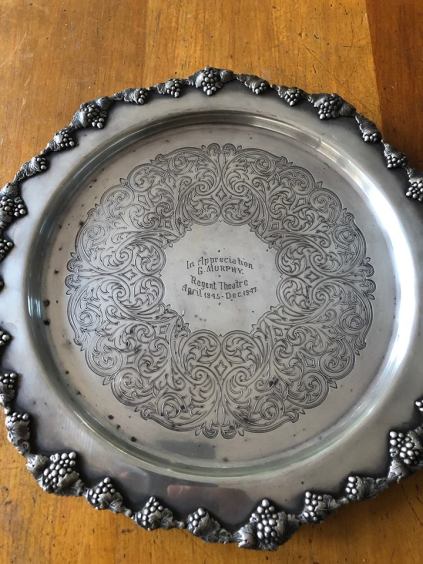 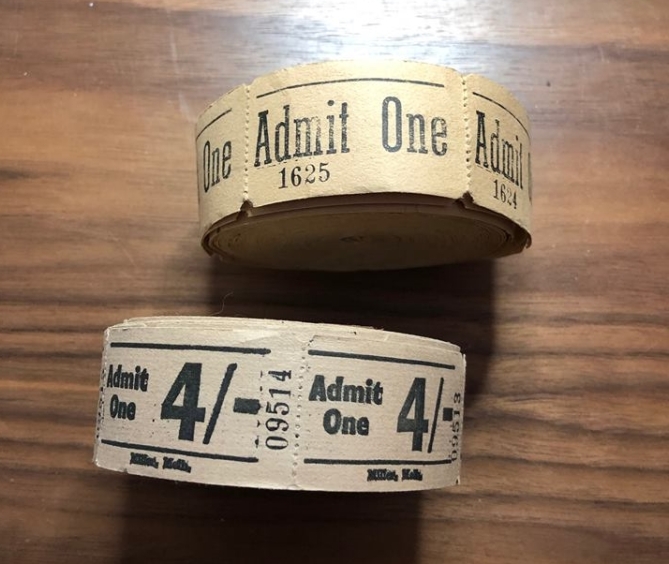 Sadly, there also aren’t many grand picture palaces left in Australia and only two of his theatres now operate as was intended. With dramatic changes in the public’s cinema attendance habits, many of these enormous structures, some with seating for several thousand people, have been demolished or reused.

The firm of Cowper, Murphy and Appleford were the cinema architects of choice for much of south-eastern Australia in the inter-war period. The practice was established in 1921 by Melbourne architect and developer Chris Cowper (1868-1954), with his junior partners Gordon Murphy and Reg Appleford (1888-1975). After 1936 Chris Cowper was an inactive partner in the company and after 1940, Reg Appleford spent an increasing amount of time working on Catholic Church projects.

It’s apparently not widely known to most architectural historians, but Gordon Murphy and Reg Appleford were brothers-in-law. They married sisters Hazel and Vera Cooke, daughters of former government stamp printer John Bradley Cooke, at a joint wedding in 1917. Fifteen years later, in the height of the depression, the Murphy and Appleford families lived together in a converted cool store near Emerald, to save money. This close personal relationship goes some way to explaining the later vagaries of the partnership’s workings – Reg Appleford drifted in and out of working for Cowper, Murphy and Appleford (or sometimes Cowper Murphy and Associates) while Gordon Murphy continued full time. Even when not working in partnership, they kept offices in the same building. 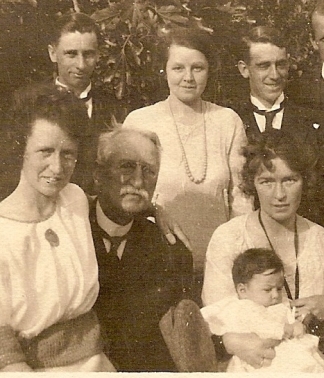 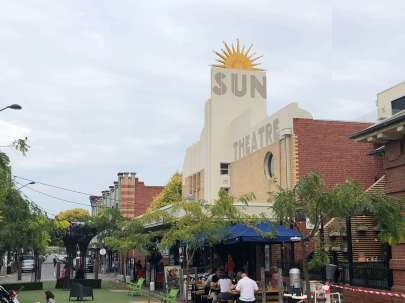 The moderne style Sun Theatre Yarraville, shown above, still thrives at the heart of its local community, as was always intended for a cinema. Photo author’s collection.

Of Cowper, Murphy and Appleford’s original suburban Melbourne cinemas, only the Sun Yarraville, constructed in 1938, survives as an operating cinema. In regional Victoria, the Regent Ballarat also continues to operate. Gordon Murphy worked on this theatre after a fire in 1943, blamed on visiting US servicemen. Two other regional theatres survive in irregular use – the Reardon Theatre in Port Fairy and the Koroit Theatre.

The Cinema and Theatre Historical Society database lists more that sixty credits for the firm. 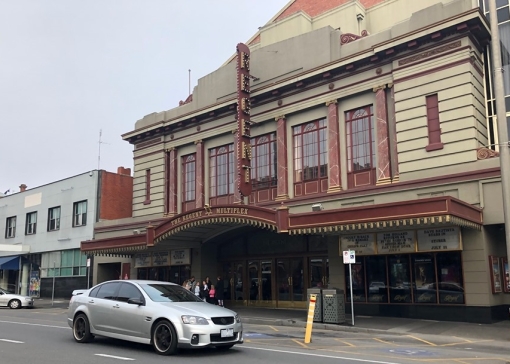 Above: The facade of the Regent Theatre in Lydiard Street, Ballarat in 2019. The complex now has 8 cinemas, although the preserved Cinema 1 still seats 700 people. Photograph Author’s Collection 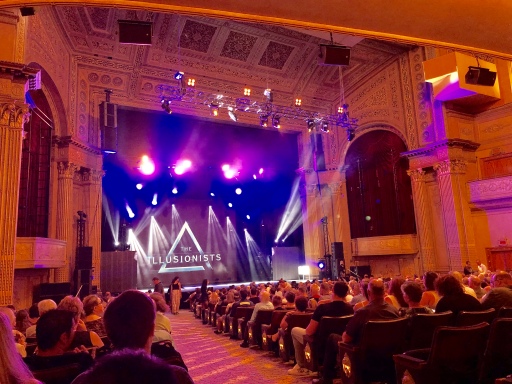 The Regent Theatre in Collins street, Melbourne was originally designed in the late 1920s by Cedric Ballantyne, the  third Australian “Regent Theatre” to be opened for Hoyts Theatres. A major rebuild was required in 1945-7 after a catastrophic fire gutted the building. Both Gordon Murphy and Reg Appleford supervised this, a difficult task in a time of shortage of materials and skilled labour, because of the War. It re-opened in December 1947 and operated as a single screen cinema (together with the Plaza downstairs it catered for 3300 patrons) for the next 23 years. But it was too big for the television age and Hoyts closed the theatre as uneconomic in 1970. Various ideas were put forward to demolish it and build something else. The survival of this rare and grand picture palace owes much to the foresight of numerous people, including unionist Norm Gallagher, Premier Dick Hamer and theatre impressario and philanthropist David Marriner. Having sat idle for 26 years, the restored theatre finally re-opened in 1996. It is mostly used today for live performances. 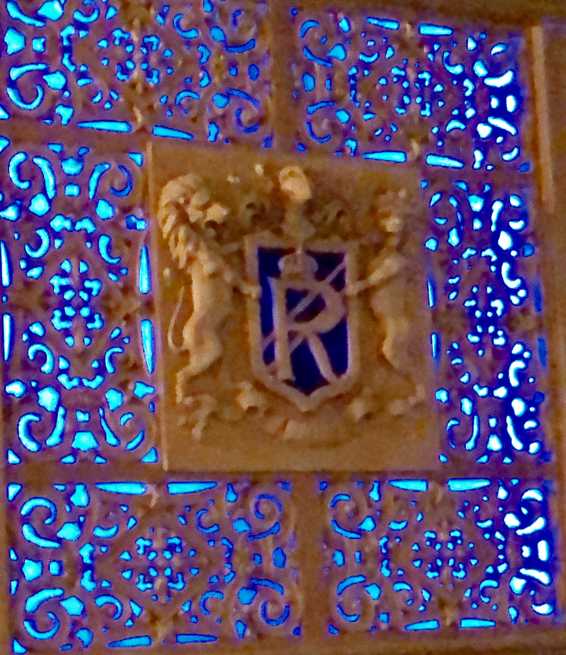 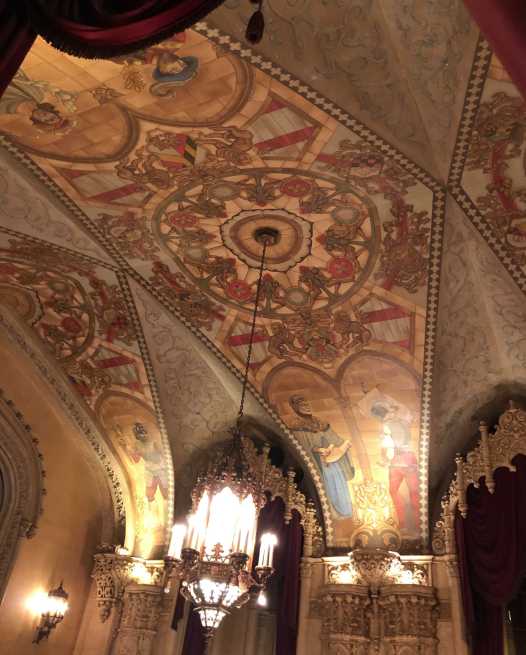 Above: The ornamental plaster work of the Regent is the work of Jim Lyall. Features of the Regent include the ornate fantasy ceilings, marble staircases and terrazzo flooring. Author’s collection.

The last cinema work the practice conducted may have been the enclosure of the balcony section of the 3,370 seat State Theatre, to create two separate venues  – the Forum and the Rapallo, a practice sometimes called “twinning.” As this was conducted in 1962 and Gordon Murphy and Reg Appleford were in their 70s, it is possible that others working for practice completed the work.

The surviving theatres of Cowper Murphy and Appleford include 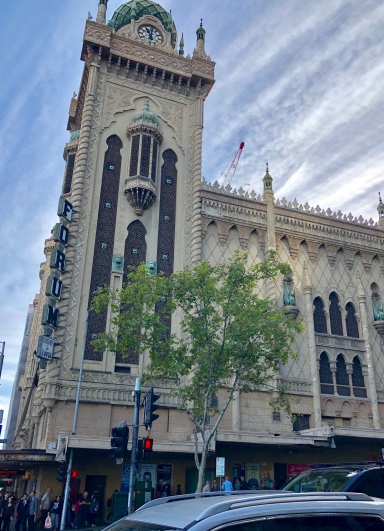 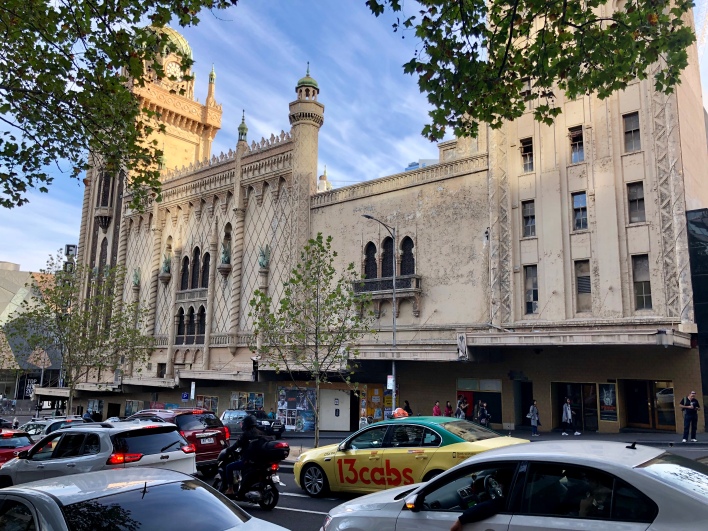 Above Left: Melbourne’s Forum from the corner of Flinders and Russell Streets -still hard at work for the Comedy Festival in April 2019. As can be seen, the external plaster work shows some weathering. Above Right: The boarded up entrance to the Rapallo is below the three single Moorish windows  (the Forum’s main entrance is from Flinders Street). The building is now owned by the Marriner Group. Author’s collection. 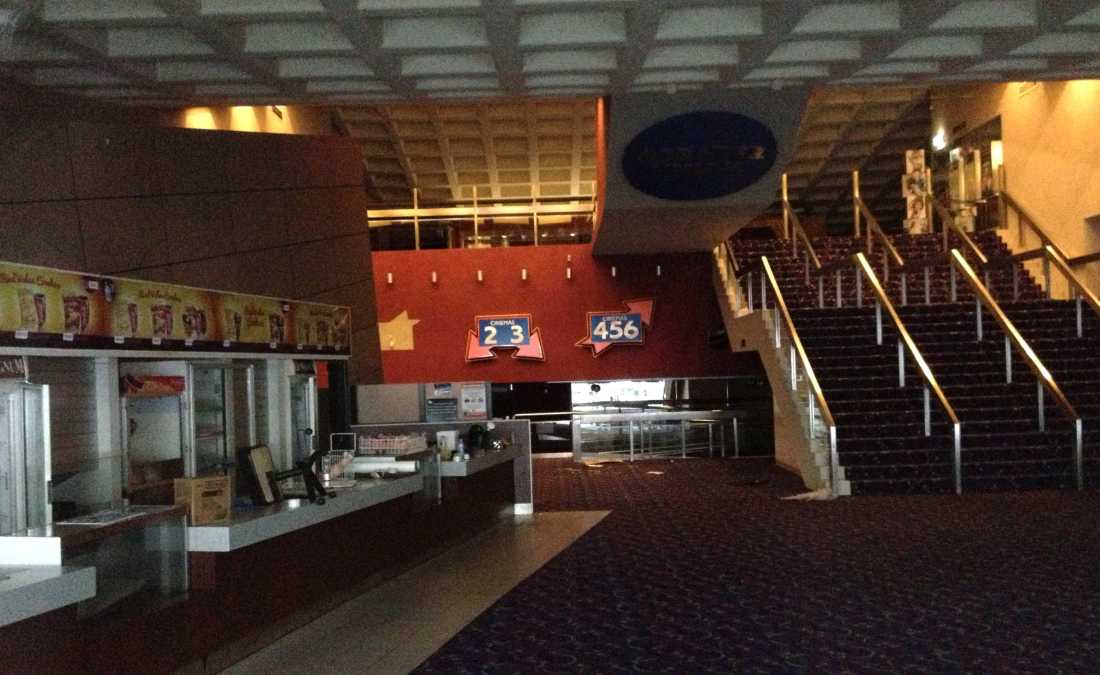 Above – The foyer of Greater Union’s very functional Russell Street Cinema Centre – a multi screen complex built to replace that cinema chain’s various city theatres. The photo was taken a few days after its closure in October 2013 and some of the lighting is still on. It had been opened with great fanfare in 1978. There is an excellent history of the old Kings theatre, which was at this location, by Ralph Marsden at the Theatre Heritage Australia website. Photo – author’s collection. 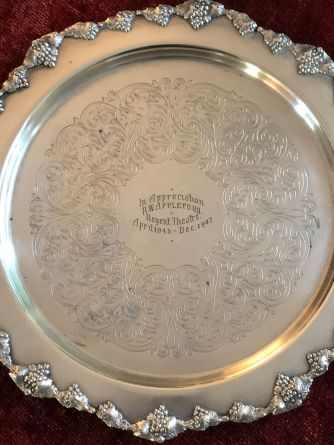 Reg Appleford’s thankyou platter from Hoyts. It’s identical to Gordon Murphy’s. Thanks to my cousin Peter Buckingham, who clearly cleans his silverware better than the author.

Gordon Murphy’s son John Murphy at the offices of Gaumont-British, with other draftsmen, names unknown. John worked on cinema projects in England in 1947. Gordon’s heartfelt desire was that John would join him in the Cowper, Murphy Appleford partnership. He didn’t. He married another architect, Phyllis Slater, and formed John and Phyllis Murphy P/L with her. Photos-Author’s collection.

A final memory of Gordon Murphy

Many years later, Gordon Murphy thought it would be a good idea to teach me and my brothers and any random friends “to drive.” By today’s standards it was incredibly foolhardy. The monstrous vehicle we drove, shown below, is a 1929 Essex Super Six at our Hastings Apple orchard. This is my last photo of Gordon. 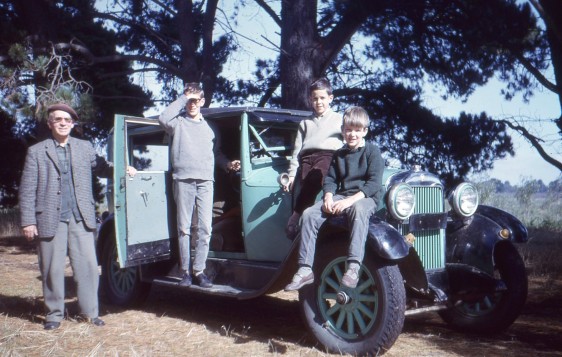 Gordon Murphy, the boys and the Essex

Richard Moir, family and the Essex

Left: Gordon Murphy and the author, second from the right in 1967. Author’s brother Jock is second from the left.
Right: Richard Moir, the author’s third cousin, and his family on a visit from Queensland, also 1967. Years later, Richard would become a leading figure in the Australian film renaissance.