Above: Marcia Ralston in a Warner Brothers publicity pose, about the time she appeared in Sh! The Octopus in 1937. Her resemblance to Merle Oberon was noted at the time. Author’s Collection.

Marie Mascotte Ralston
Born Sydney, New South Wales, Australia, 19 September 1906, died Rancho Mirage, California USA, 23 November 1988. Active on the Australian stage 1923-1927. Moved to the US with first husband Phil Harris. She re-booted her career several times in the mid 1930s but only made a few films. From the late 1960s she appeared semi-regularly in the Marcus Welby M.D. TV series.

Above: Marcia Ralston and Mona Barrie (right foreground), in Busby Berkeley’s romantic comedy Men are such Fools made by Warner Bros in 1938. Also in these screen grabs are Humphrey Bogart and Wayne Morris. The two Australian girls have supporting roles to Bogart, Morris, Priscilla Lane and Hugh Herbert. The film is still available for purchase through TCM. Author’s Collection.

Marcia Ralston was born Marie Mascotte Ralston to popular Australian stage performer John Ralston and his wife, former performer Rose nee Everson in 1906. Unfortunately she suffered through a disjointed acting career, circumstances requiring her to restart it several times over. One might imagine that having well-connected show-business parents and, after 1927, a husband who was a well-known band leader, would make for easy success in the US. It was not so. As with so many Australian women who went to Hollywood during its “golden age”, it appears her US career was not without frustrations.

Below: Ralston as Schubert in Lilac Time.”The Australasian,” Jan 30, 1926. Via National Library of Australia’s Trove.

John Ralston, better known to friends as Jack, was a popular singer and comedian who travelled the length and breadth of Australia, often performing for J.C. Williamsons, or “the Firm” as it was known and even appearing in one of their patriotic wartime films. He counted performers like Clyde Cook amongst his friends – apparently staying with him during a visit to California in 1923 and possibly performing as an extra in one of his films. Ralston apparently had no interest in staying there, his observation was that “America …is not a country for a home-loving man.”  He died suddenly in April 1933, at the age of 51, in Perth Western Australia, while on tour. The obituaries were effusive.

Despite newspaper accounts that John Ralston was not keen for his daughters to go on stage and this was the reason he sent his girls to be educated at Bethlehem Convent in Sydney, both Mascotte (her preferred name being inspired by the Opéra comique “La Mascotte”) and Edna went on stage as soon as they could. Pauline also appears to have worked later for J.C. Williamson. 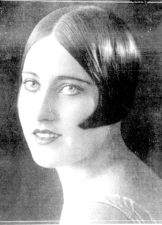 In the few biographies about her, Mascotte Ralston’s list of attributes is long, and for once these accounts appear to be true. In 1927, Australia’s “Wireless Weekly” magazine reported that the young actress, then appearing on radio, was “lavishly gifted in a dozen different ways” – these included swimming, singing, dancing, acting and apparently even playing the ukelele.

Amongst Mascotte’s first credited outings on stage were several J.C.Williamson’s productions with Gladys Moncrieff and also featuring her father –  The Street Singer and The Maid of the Mountains in 1925-26. She and her sister appear to have been working solidly with the help of their father’s patronage.

Above: Second from right, Mascotte Ralston and right, Edna Ralston in the J.C. Williamson production of Whirled into Happiness, 1924. From the Lady Viola Tate Collection – via the National Library of Australia‘s Trove.

Not only was she talented, she was also beautiful – in early 1926 she came second in the Melbourne Sun Pictorial‘s “Beauty” competition, and in June she placed third in a “Miss Australia” competition.

In 1927, Mascotte had a leading role in Arnold Ridley‘s new comedy thriller, The Ghost Train, playing successfully around cities in Australia. However, in early September 1927 Mascotte withdrew from the play when she married Phil Harris, a visiting US band leader. Soon after, the couple boarded the Matson liner SS Sonoma bound for the United States. Mascotte never returned.

Above: Phil Harris and Mascotte Ralston as they appeared in the “Adelaide News”, 7 September 1927. Via the National Library of Australia’s Trove.

Mascotte disappeared from the public record for five years, although the travels of the Phil Harris orchestra can be traced across North America in newspaper reports. Then, in 1933 it was announced that Mascotte had signed up to act with MGM. We know her sister Edna had arrived in Hollywood at about the same time – she was probably checking out her chances too.  And from now on,  Mascotte would be Marcia Ralston. Phil reportedly said that “Marcia was very understanding” of his busy career as a band leader. She was, he joked, “willing to live a life of solitude.”

Despite the usual studio publicity, not much happened at MGM, and Marcia only appeared in un-credited roles in a few films. In this, Marcia was not alone. Other actors experienced a great deal of waiting around for roles, including Gwen Munro and John Wood. It was also stated to be the reason Janet Johnston and Margaret Vyner didn’t stay in the US. It must have been thoroughly demoralising, because all this happened about the time John Ralston suddenly died back in Australia.

Marcia Ralston reappeared in late 1936, now “under contract” to Warner Brothers and with another burst of publicity, that made scant reference to her work three years before with MGM. She now seemed to have more luck finding work, and over the next two years she appeared in twelve films – many of these are still widely available today. Sh! The Octopus, a B comedy thriller film made in 1937 is amongst the best known – mostly for the amazing transformation made to Elspeth Dudgeon using makeup and lighting effects. Not withstanding this, it’s a film with a ridiculous plot, as was often a feature of the B film, a program filler. Marcia spends much of this film screaming and fainting.

In 1937, 18 year old Australian Mary Maguire was also working for Warner’s. Maguire made three underwhelming B films and had a small part in an a major film with Kay Francis. With high expectations of a booming career and both her parents on hand to advise her, Maguire bravely declined a role in a B comedy thriller called Mystery House, in early 1938. She was immediately laid off, and appeared in only one more Hollywood film. Marcia Ralston was turning 31 at the same time. Talented and experienced though she may have been, Marcia Ralston’s experience in Hollywood’s golden age might be viewed in the same context. The studios had dozens of aspiring young actors to use, and she was a just another commodity.

In 1940, Marcia and Phil adopted a child, to be named Phil Junior, known in the family as “Tookie”. Unfortunately, this did not normalise the marriage – it failed soon after. In divorce, Marcia complained that he stayed out too late and that they spent too little time together – those matters he had joked about some years before had become the issues that undermined the marriage.

She continued to work, but the roles were less and less significant, perhaps W.C.Fields’ Never Give a Sucker an Even Break is the most intriguing today. She also had extended work in the 1941 Universal spy serial Sea Raiders. Two years later Constance Worth waded through the very similar plot of G-Men versus the Black Dragon for Republic Pictures. These did nothing for either women’s careers.

Above: Screen grabs from her last films: In a minor role as an Air Stewardess in Never Give a Sucker an Even Break (1941) with W.C. Fields, in fleeting roles in Paris Calling, (1941) and in Out of the Blue (1947). These films are still commercially available today. Author’s Collection. 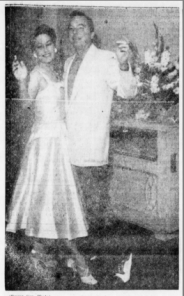 Her last film role appears to have been a small part in the screwball comedy Out of the Blue, in 1947, which newspapers claimed, she had come out of retirement to make.

It is reassuring to this writer to find that at least some of the Australians who travelled to act on screen in the US before the Second World War eventually found some normalcy in their lives. Marcia Ralston appears to have done so.

In 1954, Marcia married John “Bud” Henderson, who was an executive with the Santa Fe Railroad. By this time, she had also established herself as an instructor for Arthur Murray Dance studios, pursuing a passion she had enjoyed since her youth. The grainy photo at left from the California “Desert News”, 8 Feb 1954, shows her with dance partner Claud Sims, with a beaming smile and still looking every inch the movie star.

Good fortune had also connected Marcia to actor Robert Young, who had married John Henderson’s sister Betty, in 1933. This connection led to a small occasional role in the very popular Marcus Welby M.D, a TV series that ran for six years.

Marcia Ralston died at Rancho Mirage, an area of southern California, in 1988. She had no family left in Australia, both Australian sisters having pre-deceased her. She was fondly remembered by those who knew her in the US. Reportedly, her ashes were scattered at sea.