Above: Phyllis Gibbs on the front page of Table Talk, 14 April 1927. She had just won the First National Pictures “Quest for an Australian Star” competition. Via National Library of Australia’s Trove.

Phyllis Gibbs was born on 24 July 1908 in Sydney. She won several competitions including the 1927 “First National Film Star Quest” which took her to Hollywood, and gave her a test with Cecil B DeMille studios. She appeared in Lois Weber’s The Angel of Broadway but after 10 weeks returned to Australia. She appeared in promotions for cinemas and then in Arthur Higgin’s first film – Odds On. After this she took no further interest in film making and died in Sydney on 4 May 1943.

Phyllis Gibbs was barely out of school and working as a hairdresser in the Sydney beachside suburb of Coogee, when she began to appear in competitions. Like some of the other women profiled on this website, Phyllis’s journey to very brief fame – including an appearance in several films – owed much to the support of an eager parent. And like many, it all lasted only a very short time.

Born to Ethel Cora Wynne in 1908, her mother married insurance salesman Henry Leslie Gibbs (or sometimes Salter – Gibbs) in 1910 (See Note 1). She attended Coogee Public School, not far from the family’s flat in Havelock Avenue. Her passions were tennis and ocean swimming – Sydney’s iconic Coogee beach was within easy walking distance of the family home.

In August 1926, the Sydney Evening News reported that Phyllis had just won first prize in the “unshingled” hair competition. Unshingled meant she kept her hair long, not cut short in a bob, as was the fashion at the time. The competition was partly sponsored by the Crystal Palace Cinema in George St, Sydney and part of the prize was a £10 per week payment to appear in a live prologue performed before the popular Douglas Fairbanks film Don Q, Son of Zorro. Ethel complained about the difficulty she had faced, trying to interest her daughter in competing.”She has never gone in for anything like this before,”  she told the Evening News. “She is a real home girl.”

Above left: Phyllis Gibbs with her spectacular “unshingled” hair, in Table Talk. 12 Aug 1926.  Above right: Appearing at the Crystal Palace in August 1926. The live prologue appears to have included sword-play.  The Sun (Sydney) 6 August 1926. Via National Library of Australia’s Trove.

Such was the power of the fantasy of a “career in the pictures” that the Sydney Evening News had little difficulty attracting widespread interest in the First National “Film Star Quest” in March 1927. There were, reportedly, 2,000 contestants across Australia. As a representative from Sydney, New South Wales, Phyllis was amongst the favourites and her beautiful hair, good looks and pleasant personality impressed reporters. She was “unspoiled, unaffected, and sincere, with a love for her home, her work, and for all things beautiful” wrote the Evening News. Her untested performance skills and lack of acting experience seemed much less important than her good looks and admirable personal qualities. Not very surprisingly, Phyllis won the finals – with the prize being a trip to Hollywood and a test with Cecil B DeMille. The Evening News covered all the good news, with prominent articles and a big Page 1 photo.

In late May 1927, Phyllis and Ethel boarded the SS Sierra, bound for California and a new career – perhaps. US newspapers happily reprinted photos of the young Australian in bathers and at the beach – photos that could have only been supplied from Australia. 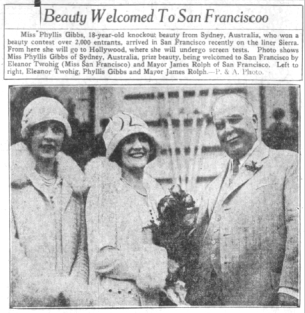 Above: Phyllis received plenty of  publicity in the US in 1927, and the bathing suit photos may have helped. In the US, the competition had become “Miss Australia” and there had been 12,000 contestants. Left; The Princeton Daily Clarion, 24 June 1927. Centre; The Arizona Republic, 28 June 1927, Right; The Fresno Morning Republican 11 July 1927. Via Newspapers.com

Unfortunately, Phyllis’ fans had a hard time keeping up with her activities in Hollywood because there was not much to report. At the end of July, Australians read that she had started work in her first film for DeMille Studios, The Angel of Broadway, directed by Hollywood’s leading female director, Lois Weber. Several Australian papers claimed she appeared in as many as four films for the DeMille Studio, but this seems impossible to verify now. If she ever did appear in Forbidden Woman, Main Event or The Girl in the Pullman, it is likely she was an extra. Just how much time she really spent with DeMille himself is also difficult to determine. Sadly,  the censor would not approve The Angel of Broadway for release in Australia and unfortunately is now considered a lost film.

In late August and only eight weeks after arriving, Phyllis suddenly announced she had had enough, and was coming home. The official reason was that she and her mother were “homesick”. The contract DeMille’s studio had presented to her looked wonderful to Australian eyes – with its increasing rates of pay and the chance of a new contract if all went well. But she declined it – perhaps she realized it was just a typical contract of the time. By early October she was at home in Sydney again, embracing her friends. 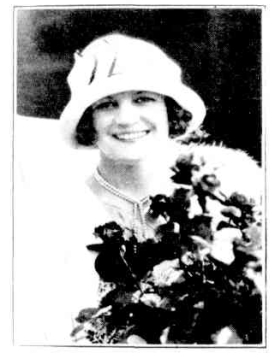 Above: Phyllis Gibbs on her happy return. Table Talk, 20 October 1927. Via National Library of Australia’s Trove.

So what happened? Not surprisingly, she was careful to find the right form of words. She assured the Evening News it had been “like a dream” and that she had had a wonderful time. She was, after all, deeply indebted to the paper that had been her staunch advocate. She was also careful to say that everyone in the industry had been so welcoming. But, she explained, the whole Hollywood “atmosphere… was an environment I could not have lived in.” She wished she could have the same opportunity in Australia.

And she did.  Within a few months, cinematographer Arthur Higgins had signed her up to appear as the love interest in his first film as director – a horse racing drama entitled Odds On, with popular actor Arthur Tauchert. The ever loyal Evening News claimed, apparently in all seriousness, that there was “little left in Australian literature but racing themes for film work.” Film historians Andrew Pike and Ross Cooper note that the film was made for a modest £2000 in mid 1928. It had a release in the UK as a “quota film” which means it probably returned its money. However, it was a silent film – which is possibly another reason it has not survived. Like The Angel of Broadway, it is now considered a lost film.

During 1928, Phyllis was employed on a lecture tour of provincial Australian cinemas, where she sometimes screened the footage of her test for DeMille’s studio and talked about her Hollywood experience. She was also paid to drum up publicity for Odd’s On after its release in October 1928. Again she appeared in person at some screenings.

Above left: Phyllis advertising for Heenzo, a cough cure, in the Sydney Morning Herald 24 May 1928. Via Newspapers.com
At right: A full page spread modelling hats in Truth, 14 April 1929. Via National Library of Australia’s Trove.

She continued with advertising engagements but by 1933 had returned to hairdressing in Coogee, keeping her own business going until the late 1930s. She married Charles Young, a salesman, in April 1933. A son was born of the union in 1935.

Above: Phyllis advertising for a new hairdresser in her salon- Sydney Morning Herald, 8 April 1937. Via National Library of Australia’s Trove.

What really happened to Phyllis in Hollywood? In the absence of meaningful interviews we can only speculate. Phyllis was not alone in rejecting a Hollywood contract – Margaret Vyner, John Wood and Janet Johnson all did this in the 1930s. This writer thinks Phyllis was probably astute enough to see how most actors ended up – in supporting roles, waiting around a lot and often far from family and friends, doing work that was nowhere near as exciting as some claimed. If that was what she thought, and she got out while she could, she is worthy of our admiration today.

Phyllis died unexpectedly in May 1943. She was 35 years old.

Note 1
No father is listed on Phyllis’ 1908 birth certificate, and the place of birth given is 203 Albion St. Presumably this is Albion Street Surry Hills, an inner suburb of Sydney which had many boarding houses at the time. It appears likely that Ethel (a 19 year old from Ballarat in Victoria) went to a boarding house to give birth, probably one that specialized in hosting expectant women who were on their own. The 1840s cottage (with the cottage next door) is now preserved and owned by the Royal College of Pathologists of Australasia.