The Chapel of Academy of Mary Immaculate, Nicholson Street, Fitzroy – Mary Maguire’s old school. Established in 1857, the school continues to operate on the same site and in a rare Melbourne street-scape that is almost unchanged.

One of Mary Maguire’s classmates, who lived in Collingwood with a bed-ridden mother and unemployed step-father, remembered her vividly. Jo Mostyn (nee Gardiner) was one of the Academy of Mary Immaculate girls invited to a birthday party for Peggy (she never called her Mary), a very grand affair, held in 1931 at the Maguire’s Hotel Metropole. Memories of the day; dressing up in her one and only best dress – and the highlight – a Sennitt’s ice cream cake that arrived late on a hot summer’s day, to Mick’s great annoyance, remained with Jo all her life. In contrast, Jo’s own birthday, a few weeks earlier, couldn’t be celebrated at all. Jo was a charity case at the school, and her sick mother and unemployed step-father, broken-down jockey Jimmy Gardiner, were reliant for an income on his door to door sales of hand-made rag-rugs, that they made at home at night. To the end of her life, Jo remembered Peggy Maguire’s friendly nature and endless good humour, her deep black hair and flashing brown eyes. She recalled that Peggy looked like a movie star, even when she was at school. It says much about Peggy that Jo’s impoverished situation made no difference to her being a friend. Jo took a perverse delight in the knowledge that at least she was better at “adding up” than Peggy. 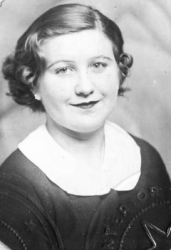 A few years before she died, in about 1972, Mary Maguire did finally make contact with a few lost school friends, including Jo Mostyn. Jo had last seen news of Mary when she married Bobbie Gordon-Canning. She had imagined Mary was still living in great style in some English castle, or a stately home somewhere, but she also worried that the invalid-chair she saw in photos meant Mary had a serious illness. It was a relief to hear from her, through the good graces of one of the nuns, who had somehow made contact. The letter came out of the blue, and Jo read it and reread it, perhaps searching for some understanding of why Mary was now in the US, whether she had children and was she still in films.

The letter, which no longer exists, was apparently only a page or so long. Written in Mary’s distinctive hand, it apparently painted a fairly superficial picture of Mary’s life in California – the sunny weather, the good food and the interesting things happening around her. She mentioned her regular church attendance and one or two friends she often saw. She mentioned Phil with some pride, touching on his success as an Engineer and his recent death; but of her career in films, her Hollywood friends and her time in England, she said nothing. As always, she ended with a promise to return to the Australia she still missed, “soon.” “I would love to ride on the Melbourne tram to the beach again” she wrote.

Jo Mostyn wrote back at Christmas time and again the following Christmas. But there was no further response from Mary. It was as though the letter Mary had written was her final effort to reach out, one last time, to old friends of the past, and a life she had long since lost.

Years later Jo would sigh as she told the author how beautiful Mary was. She would relate at some length how much everyone at the school admired Mary and her sisters. By the time she told me this, Jo was living a happy but modest life in Melbourne’s eastern suburb of Ringwood, with a husband, three grown up children and four grandchildren. Little did she know that Mary had then been dead for ten years, and her later life had not been one of film-star glamour, ease and luxury. Jo’s own childhood had been one of significant hardship and poverty in depression-era Melbourne. But in the end, she lived a life as fulfilling and rewarding as Mary’s, although she was never to know it. Jo’s fantasy that a school friend from grimy Melbourne of the 1930s had succeeded in the film world and was living in luxury and comfort, stayed with her to the end of her days.

Most of Mary Maguire’s Melbourne has been demolished. However, she would recognise this stretch of Elizabeth Street between Bourke and Collins.(left) It would have been visible from windows at the rear of the Hotel Metropole.
Her old school in Nicholson Street, Fitzroy, appears almost unchanged from this angle (right). Author’s Collection.

A list of further readings can be found at the end of Part 1.